THE SENIOR SERVICE RESIDENCES IN THAILAND 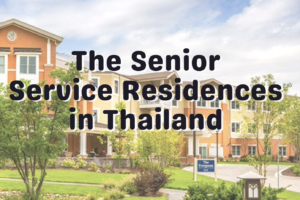 THE SENIOR SERVICE RESIDENCES
IN THAILAND

Recent statistics released by the Thai government reveal that the Kingdom has entered a new era of an ageing society with more than 20% of the population aged 60 and over. This percentage could rise to 25% by 2030. Some media articles have even dared to use strong titles such as “Grey Tsunami”…

In the last century, Thailand saw its population multiply by 4 to reach 63 million in 2020 with an economic boom and an average annual growth of 10% until the 1997 Asian crisis. We observe today the same phenomenon of ageing of the population as that observed in the Western countries and other Asian countries like South Korea and Japan when the curve of economic development and fertility were seen opposite.

However, Thailand has many advantages. The first of them is the very important and respected place of the elders in the local society and culture. As in the majority of Asian countries, not to say all, the family and the particular attention paid to the elders are the cement of one of the pillars of these cultures. It is still very rare, not to say frowned upon, not to take care of one’s elders and the latter are often entrusted with the attention of the younger ones while the parents work. The religious influence of Buddhism is also preponderant in this privileged relationship between generations. All of them often live under the same family roof, whereas this has become very rare in our Western cultures.

This intergenerational solidarity of the Kingdom of Thailand is thus a privileged asset for the Western retirees or the people in situations of dependence and more and more confronted with loneliness. This situation or feeling of loneliness can be experienced as a couple but even more surely when one is alone without any close family ties and/or when the latter are far away and preoccupied by their own life and needs. This is even more prevalent in difficult times such as the one we are currently experiencing.

As we age, we all become, to varying degrees, more and more dependent on outside help. We all need more medical care, personal assistance for daily tasks and to stay connected to a world that is increasingly virtual and that escapes us because everything goes too fast. Sometimes we just need or wish to find a certain comfort in our lives with people who surround us on a daily basis with small attention that make a difference.

Fortunately, we have been able to develop infrastructures in the West to accommodate our ageing population although many of our elderly still enjoy a certain dynamism thanks to medical progress, but not only. However, the essential is often missing even if what is essential for one person is not necessarily the same need for others. The economic aspect is also important in our society, the vast majority see their purchasing power decrease with pensions often far from the standards of earnings known when they were active. Meanwhile the cost of living increases without even mentioning soaring taxes. Access to services for the elderly and dependent persons is also often limited and unaffordable for many.

A growing number of retirees and pre-retirees are therefore looking for solutions elsewhere and ideally in a sunny environment.

Certain destinations have been privileged, such as Southern France and, more broadly, Southern Europe, with Spain and Portugal in the lead. Morocco has also been a popular destination for a while in the senior citizens market. More exotic destinations such as Thailand are now a more credible alternative in this market. Of course, the worldwide sanitary situation and more particularly the last wave hitting South-East Asia have temporarily put into question this development. Nevertheless, the aforementioned strengths remain and the crisis can also bring its share of opportunities on the foreign exchange market, but that is another story.

Notwithstanding the current difficulties for which we all hope that they will quickly have a happy ending with vaccinations and economic recovery measures, Thailand remains today well positioned on the seniors’ market. The country is offering a favorable climate all year long, its pleasant lifestyle, its friendly population, its excellent personal services, its international standard hospitals and its overall more affordable cost of living for many Westerners. Nevertheless, many Thai real estate promoters are launching themselves on this market for the most affluent families of the Kingdom even if the demand remains limited mainly for cultural reasons as mentioned above.

Thailand thus offers excellent opportunities for development and investment in a niche market with still a great potential of growth in the years to come for all the actors of the market. International professionals in the management and marketing of this type of accommodation will also have their card to play as are already doing very well and successfully the major brands of the hospitality industry.

Thus… South of France, Spain, Portugal, Morocco, Caribbean, Polynesia and many others. All these destinations offer many advantages and Thailand is certainly not lacking in advantages to position itself on the senior population market.