Home / Retirement / To retire in Thailand as a foreigner 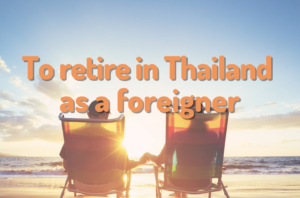 Following on from our previous article, “Living in Thailand“, we are now focusing on people who have stopped working in their fifties.  It is obvious that not everyone can or wants to stop so early, however recent studies are suggesting that more and more people are deciding to quit if the planets are aligned.

Westerners are the ones who most often leave their homelands to retire in other countries.  Not all of them are necessarily looking for the tropical sun, although it is a well established trend. One such destination is Thailand, which is attracting an increasing number of them, whether they have worked there or simply stayed on a tourist trip.  The Kingdom attracts for its warm climate all year round, the beauty of the landscapes whether it is the beaches of the south or the countryside of Central and Northern Thailand as well as an attractive cost of living compared to western standards.  Many people are also simply looking for something different than what they have known all their hard working lives, and the Thai lifestyle and culture, the kindness of the Thai people, the legendary “maipenrai” (no worry) and the local cuisine are often put forward to justify the choice of the Kingdom.  Of course, everything is not so simple and there are a certain number of constraints.

The biggest decision to make is the one to leave, then the destination to settle down.  Relocating to Thailand is a powerful choice of life for retirement.  It is important to be able to accustom oneself to the climate and, in addition to the culture, there is also the language barrier which has nothing to do with any Western language.  One can phonetically read Italian, Spanish, French, Portuguese, English, German or Bahasa, the language spoken in Malaysia and Indonesia, the neighboring countries of Thailand, even if one does not understand it, อ่านภาษาไทย (reading Thai) is another matter…

Nevertheless, Thailand remains a destination to be privileged for its already mentioned characteristics and also because it appears in the top of the list of the safest countries for foreigners.  There is certainly an existing and rampant criminality as elsewhere, but it rarely affects foreigners who represent 10 to 15% of the GDP of the Kingdom, evaluation based on tourism figures in 2019 before the current health crisis.  Some believe that this ratio is higher when taking into account the contribution of foreigners living in the country, whether retired or active.

Obviously, as mentioned above and in our previous article “Living in Thailand“, there are some constraints to take into consideration when you want to settle in Thailand and especially for retirement.  It is thus necessary to think well about the project and beyond the constraints already mentioned like housing or health coverage, the future retirees will have to obtain a “retirement visa”.  This visa can be requested at the Thai Embassy or Consulate in one’s country of origin, but it can also be obtained on the spot from the competent immigration authorities where it is known as the Long Stay Visa for Non-Immigrant O.

We will not go into the details of the administrative formalities here. Nonetheless, the main points to obtain the visa when applying are

Note: it is important to know that a retirement visa does not allow you to work in Thailand.

Retired expatriate communities, especially Westerners, are important in Thailand and still are today despite the pandemic.   Many were already settled in the Kingdom in working life, they have been joined by others arriving as retirees.  It is however obvious that the travel restrictions linked to the health crisis have strongly slowed down the demand and probably temporarily reversed the curve.  It is nevertheless obvious that the attraction of the Kingdom remains intact and as Victor Hugo wrote: … “Even the darkest night will end and the sun will rise…” (Les Misérables – 1862)

Thailand, a destination of choice for vacationing, working or living a happy and peaceful retirement.