In power from 1644 to 1912, the Qing was the last imperial dynasty of China. At that time, the most remarkable achievement was the importance given to “Literature”, an art that made great progress during the 17th century under the Qing emperors “Kangxi” and “Yongzheng”. The compilation of the ”Kangxi Dictionary” and the creation of “vast encyclopedias” were carried out and brought to the knowledge of the Chinese people. The Dictionary contains more than 47,000 characters and has served as a standard Chinese dictionary for generations. As for the Encyclopaedia, it covers many subjects, including literature, political governance, history, and any special events that happened in the Qing region.

On the far left picture, it is believed that the text was written by a famous professor whose poetry reflected the realistic ways of humanity life.
In the photo on the right, the representation with two women standing under a plum tree, this is probably a scene from Chinese literature. Art and culture allow today’s audience to have representations of historical scenes and to understand the message the artist wanted to convey. 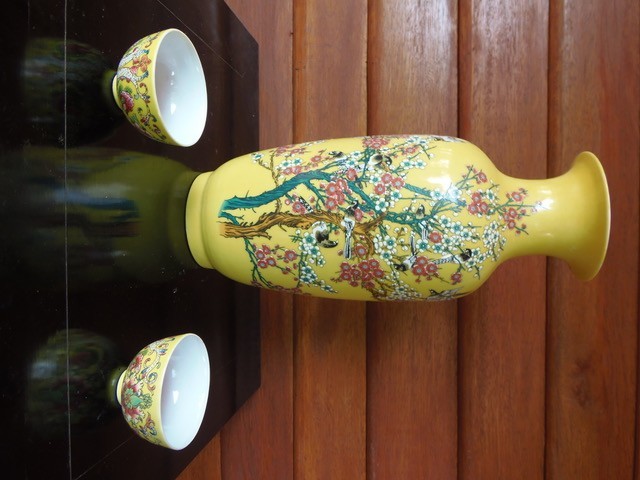 “Yingcai” or strong colour is the term used to enamel porcelain with predominant colours such as yellow, green, black or pink as can be seen on the porcelain in the picture on the right. This set of yellow porcelain, consisting of a vase and two small bowls represents magpies on plum tree branches.

The porcelain is not only a decoration of aesthetic consideration, but the painted characters also have their meaning, most often a good omen.  In the example of this porcelain, the magpie is the bird that brings “good fortune and happiness”, while the plums, pink and white, are associated with “longevity” so that the image of the magpie on plum tree branches means “a wish for marital joy”